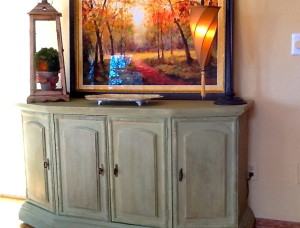 Here it is folks!!  The finished piece -the buffet.  It gave me a problem at first, but after some guidance and some quick tricks, I’m happy with it.   I’m not sure if its home will remain in mine but for now it is useful.

Here is a picture of what it first lo0k liked after it was painted and antiquing cream added to it.  It became very streaky.  Not the effect I was going for. 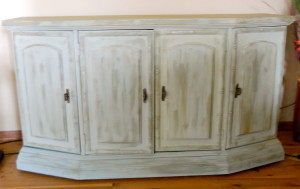 I let it sit in my living room for a couple of days and would pass by it feeling defeated.  That was it. I was just going to leave it.  Then I got some encouragement from  a professional designer and implemented some of her suggestions.  I sanded it all and used Miss Mustard Seed Antiquing Wax this time.  Again, I lightly sanded the spots that were too dark and then added the clear wax to the whole piece .  It was finished off with a complete buffing.  Much happier now!!

What did I learn?  Walk away from a struggle but revisit with a different perspective.  It might not be as difficult as it seemed.  Have you ever felt like giving up, but instead now you feel a sense of accomplishment?  I wonder what project will be next?  Stop back to see. 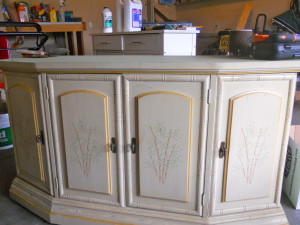