Update on January goals for Thrifty to Nifty blog 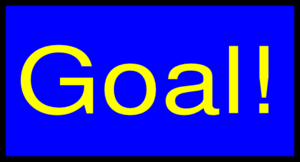 Happy February to you all!  I know we are almost a full week in, but it has taken me this long to process that.  January flew by!  Did that happen to you, too?  I swear, I was just posting my New Year’s goals for this blog. It seemed like yesterday! That being said, I thought I would check in and give a recap of how I am doing with those goals.

Goal #1: Tweak projects already in the works and/or blog about them.

Update:  I was able to reveal the news of a  piece of furniture I hunted for to replace pieces I move out. I then followed up with an update on how I was making it my own.  I also blogged about 2 projects I completed that were always just  ideas in my mind– repurposing picture frames, and creating a chalk board tray.  I had all the “goods” to do these projects, yet they never got completed until I established this goal in January.  It feels so good to check it off!  I have to admit, I struggle with completing projects. ( Gasp!)

Update:  Oh my! That was sooooo hard, but I did it!  I have to tell you, I really, really really, enjoy the hunt of the treasure, so I had to be very disciplined.  I looked but did not spend.  It was hard.  I did pass up two furniture pieces that were great.  However, I told myself I have projects already waiting to be worked on.  That self talk was very helpful. I also took the time to begin organizing my stash and came across some pieces that I was no longer in love with.  In-turn I posted them for sale and out they went.  I also have a pile for donating.  It feels good to purge but still there is work to be done.

Update: I created a schedule for myself.  I created a list of potential posts, scheduled on the calendar days to work on those projects, days to take pictures and edit and then days to write and post.  It worked well in January. I was able to complete four posts– one a week.  I’m very pleased with that.  For February, I think it would be helpful to schedule time to process more of my stash.  There is too much.

There you have it.  A recap of the happenings at Thrifty to Nifty.  How was your January?  Where you able to accomplish what you intended?